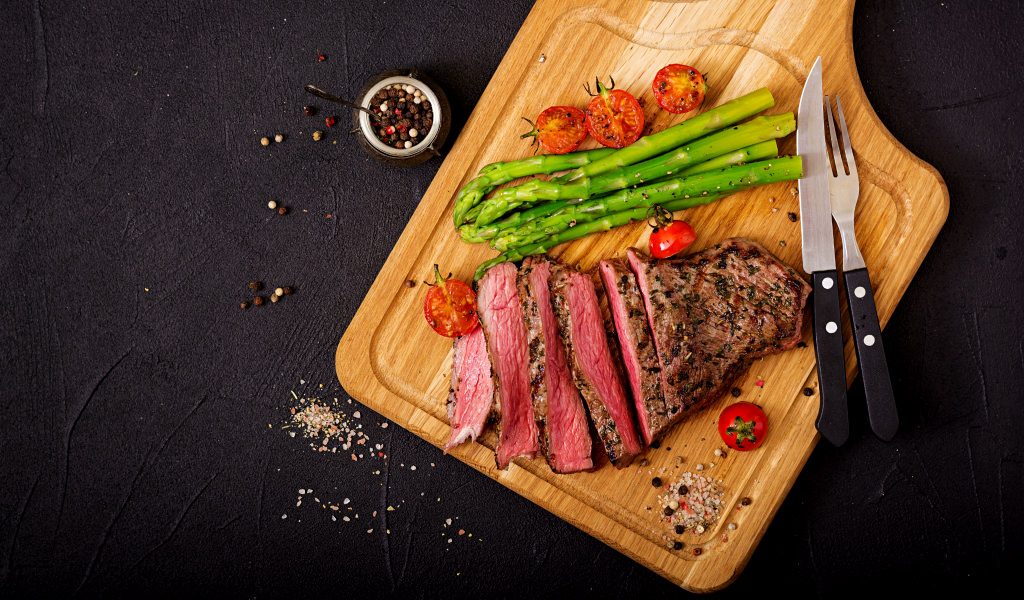 We all love a deliciously cooked steak, but not everyone knows how to choose a cut they like and cook it correctly. This blog will outline the various cuts available and how best to cook them. Hopefully, this will encourage those not too sure to confidently purchase and cook a delicious steak.

For optimal quality, we only choose to purchase our beef through ethical Victorian farms who have raised their cattle on grass. It is extremely important to us that our produce has been raised to the highest animal husbandry standards and that the beast has been raised grazing as nature intended, on grass. Put simply, grass-fed animals live a happier life and taste better. Once in-store, our beef is aged for maximum flavour and texture.

Prime Rib and Rib Eye/Scotch fillet steak
Found on the upper part of the cow’s back, the prime rib (bone-in cut) and rib eye/scotch fillet (bone removed) is the trimmed eye of meat found within the rib section, which spans from ribs six through twelve. Due to the fat content or marbling in this cut, they are full of flavour, tender cuts of meat high in fat and low in connective tissue.
To cook: best cooked medium-rare. The prime rib is generally a thick cut which makes it suitable to char on the BBQ or grill whilst keeping the inside medium-rare. If not using a BBQ, sear the prime rib in a hot pan and finish off in the oven. Cooking the rib eye medium-rare allows the fat to be released basting the meat which results in a full-flavoured, tender steak.
See below for cooking times.

Sirloin Steak
The sirloin is found in the middle-back or hind-quarter of the animal, in between the rib and rump. It is one of the most popular and common cuts of beef, but does go by a number of different names and variations. You may see it referred to as a sirloin, porterhouse, New York strip or strip loin steak, in any case, they are all the same cut of meat and are all boneless. The bone-in version is known as a short loin, which is often also referred too as the T-Bone steak. Very confusing for the consumer, I know! The sirloin has less marbling than the prime rib and rib eye, but does have a strip of fat running down the length of the cut, which, when cooked, continually bastes the meat.
To cook: best cooked medium-rare. Due to its location near the heavily exercised rump, the sirloin is less tender than the prime rib or rib eye, making it suitable to pan fry or grill.
See below for cooking times.

Porterhouse/T-Bone Steak
This is a cut of meat with the sirloin or porterhouse, on one side and the smaller filet mignon cut or tenderloin section on the other, divided by a bone, or the T-bone. The size of the smaller tenderloin dictates the classification of the steak. If the tenderloin section is large the steak will be classified a porterhouse, whilst a small tenderloin designates it a T-bone. In summary, all porterhouses can be referred to as T-bones, but not all T-bones are porterhouses! Again, very confusing! However you look at it, a genuine porterhouse  is a terrific sharing steak for two who enjoy a taste of both cuts of meat.
To cook: a quintessential Aussie steak perfect for pan-frying or barbecuing. In a hot pan, sear the steak 3 minutes one side then flip steak for a further 2 minutes. Remove from the stove top and add butter, garlic and herbs of your choice. Then finish the steak off in the pan in a 230 deg hot oven for 6-7 minutes or internal cooking temperature of 60° degrees depending on the thickness of your steak.
See below for cooking times.

Rump Steak
A rump steak is taken from the hindquarter of the animal above the hip joint. A strong working muscle, with a subsequent lack of fat or marbling, the rump can be less tender than other cuts, but if cooked properly, is full of flavour and delicious.
To cook: Rump steak tastes the most flavoursome when grilled or barbecued, whereas a rump roast of meat is best suited to braising or oven roasting. Similar to the porterhouse/T-bone steak, pan frying in a hot cast iron pan or griddle will harvest the best results. Hot pan to sear then low heat to cook to perfection.
See below for cooking times.

Fillet steak/Eye fillet/Tenderloin
Of all the different cuts of beef, the eye fillet is often considered king. While porterhouse steaks, rib eye steaks, and scotch fillet steaks all have their place, it is the pure quality of the eye fillet which makes it stand above the rest. An eye fillet steak is lean, tender, healthy and an incredibly versatile option for the family.
To cook: as the fillet can be prepared in many different ways, cooking methods differ accordingly. To prepare for cooking, you first need to remove the fat and silverskin (connective tissue) surrounding the fillet. Here at Di Censo butchers we will have done this for you in-store. Each eye fillet should yield roughly 12-14 eye fillet steaks.
See below for cooking times.

So there you have it! An overview of the popular cuts of beef steaks available at Di Censo butchers. Once you’ve decided the cut you’d like to try, follow these simple rules below for readiness by pressing them gently with the tip of your tongs or finger:

Using a thermometer? Internal Temperatures for Steak are as follows:

As always, feel free to ask any questions regarding steaks or any other cuts of meat. Our staff are always very happy to offer advice and recommendations!